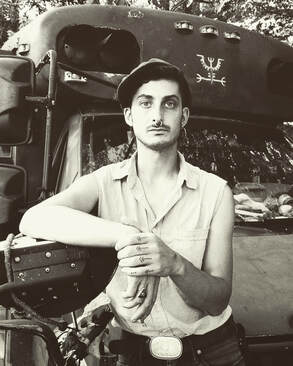 Born in 1988, Bobby's formative years were spent in the once small logging town of North Bend, WA. In 2009, he enrolled in the Aristides Classical Atelier at the Gage Academy of Art in Seattle, and completed the four-year program in 2013. After formal training, Bobby began wandering the country and landed for several years in Vermont. Upon returning to the Pacific Northwest, the devastated wildernesses of Washington state began to heavily inform the tone of the work he'd begin to create there.

Often living in different parts of the united states such as Washington, Vermont, and New Orleans, Bobby works wherever he establishes a studio. When not painting or drawing, he frequently tours the country with his band, DiTrani Brothers.

In addition to personal work, Bobby has created imagery for bands such as The Resonant Rogues, Intuitive Compass, Mike Antone, Isenordal, Impulse Noise, Asymmetric Warfare, and his own band, DiTrani Brothers. He has also recently finished a project with poet Gennarose Nethercott and Ninepin Press entitled "Lianna Fled the Cranberry Bog," in which he created over 200 illustrations to accompany a series of narrative prose.